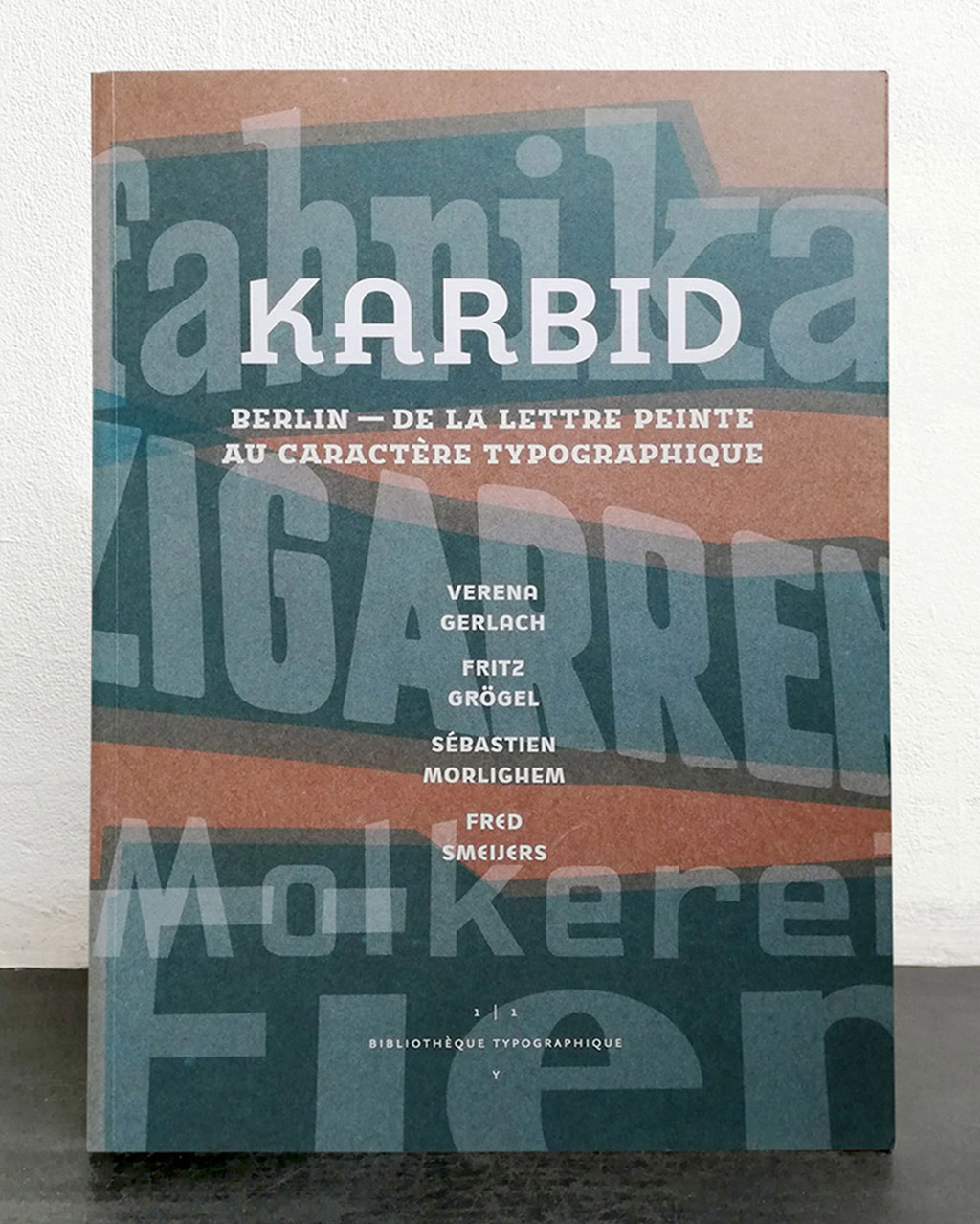 “Towards the middle of the 1980s, Verena Gerlach, a Berlin-born adolescent, regularly crossed the control post on Friedrichstraße to visit a friend living in the east of the city. She started to note and to memorise the inscriptions, shop signs and murals that decorated the facades of buildings and shops, painted in most part between the 1900s and 1940s, and left to decay. After the fall of the wall, Verena, now a student in visual communication at the Kunsthochschule Berlin Weißensee, deepened her exploration of the areas in east Berlin, more specifically Prenzlauer Berg and Mitte. Here she gathered photographs between 1991 and 1998, documenting a large number of shop signs and facades. She returned in 2005, endeavouring to review her initial viewpoints, and could not fail to notice the effects of reunification: this unique epigraphic heritage had almost completely disappeared, covered by the contemporary dealbatores of capitalism.”

?“Amongst my favourite books about typography and lettering I have read lately, Karbid, Berlin—From lettering to type design stands out as one where I possibly have learned the most new things.
I am thankful for the authors to have taken me on this fascinating journey in a lesser-known area of letter art.”

The featured typeface FF Karbid Pro was originally inspired by these storefront letterings from the 1920s and 1930s. Using it as a starting point, I then disseminate its spirit into a family of well-behaved but energetic text faces.
FF Karbid is the result of Verena’s final diploma work in 1998.

The painter’s letters—On history and forms of German lettering is the first of Fritz Grögel’s essays written for this book. The methods of production and reproduction of letters in Germany between the end of the nineteenth century and the beginning of the twentieth century were, as in many countries, typography, engraving and lithography. Yet, the fertile territory of letter painting remains overlooked and little known. Grögel weaves links again between its techniques and its forms with much precision and many rare and forgotten documents. His second essay, Daily life’s witnesses—Berlin letter painting portrayed, goes even further into the manifold practices, medias and styles of letter painting.

The foreword, written by Fred Smeijers, underlines the significance of Karbid and moreover its fecund connection between type history and type design.

Sébastien Morlighem’s introduction deals with the power of writing and its fragile permanence in the city. Even more than the book, the city is the domain of letters, as they can be seen and appreciated by everyone. All the signs, inscriptions, posters, painted murals on the façades of buildings are the marks of memory, daily renewed. 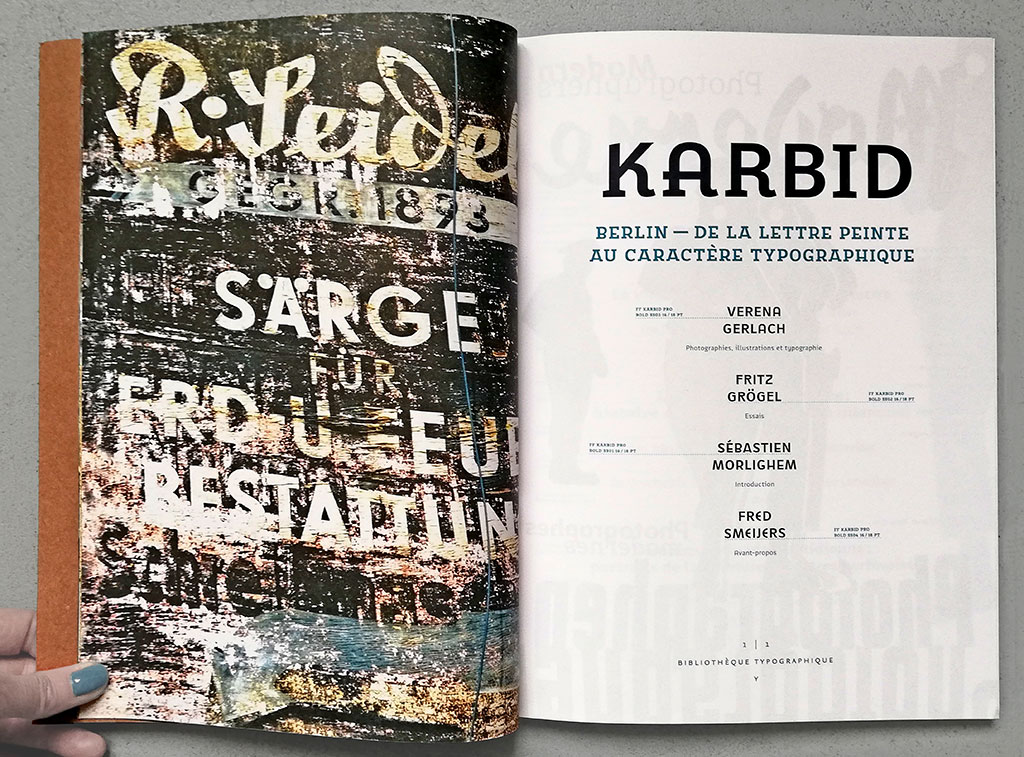 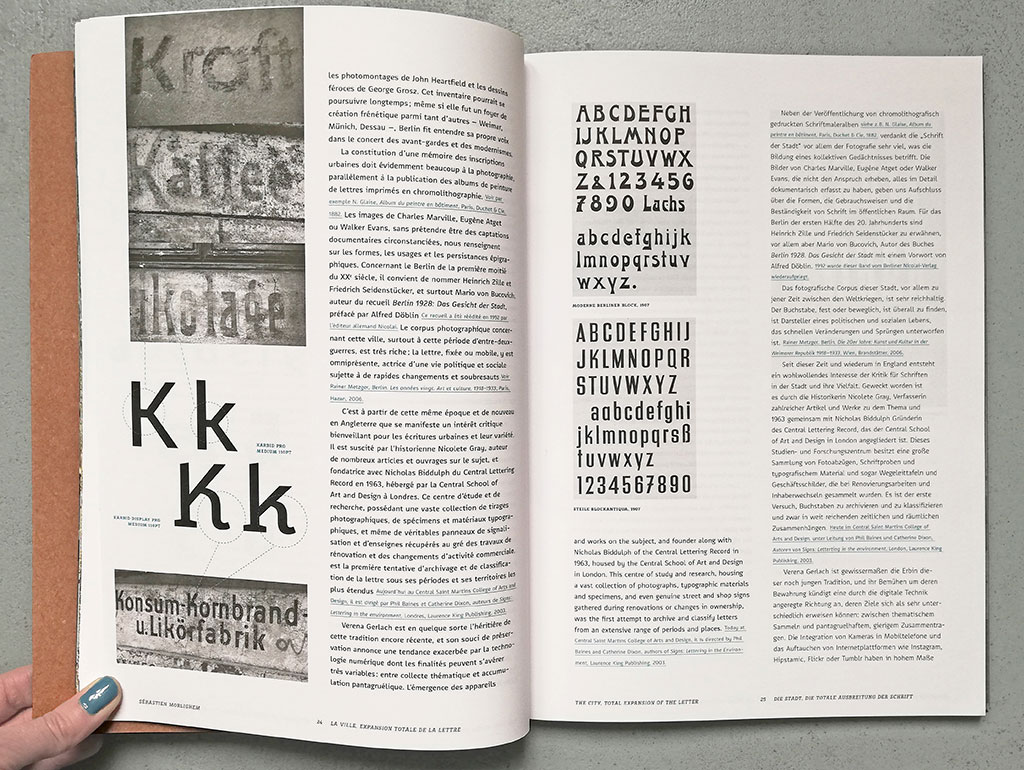 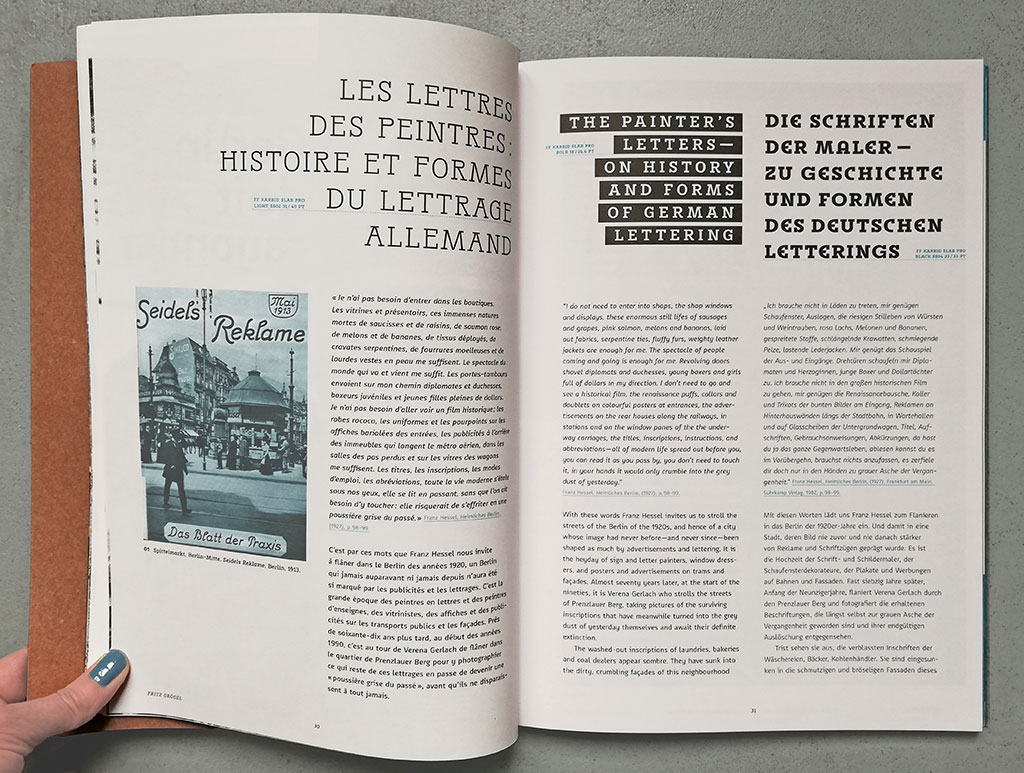 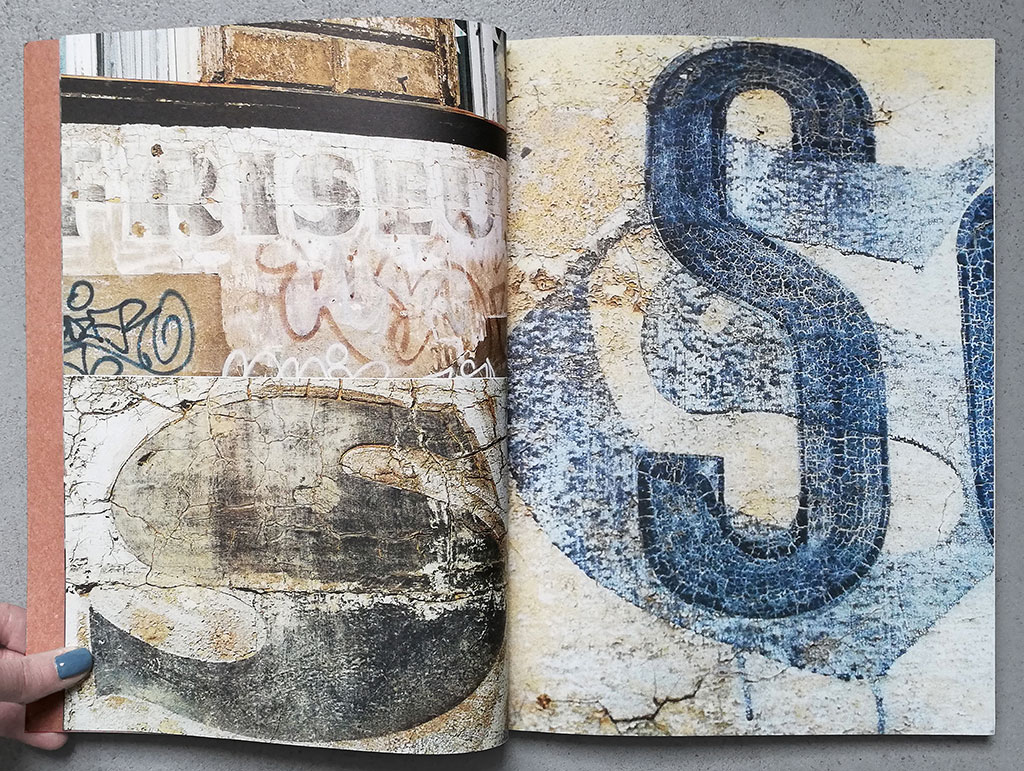 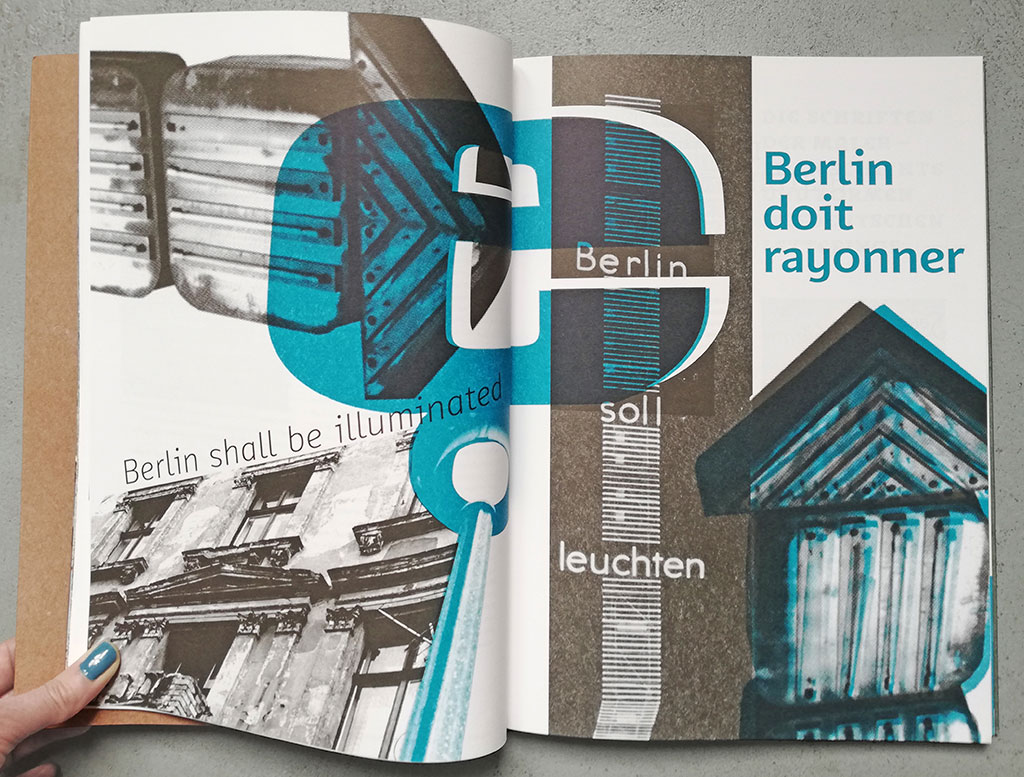 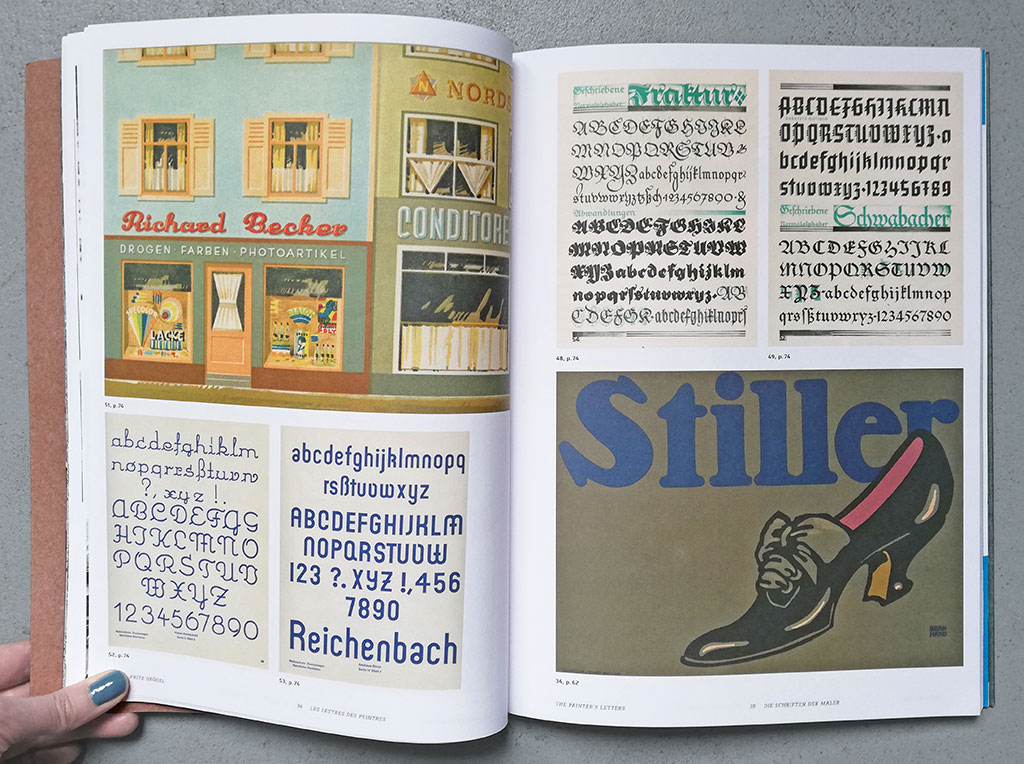 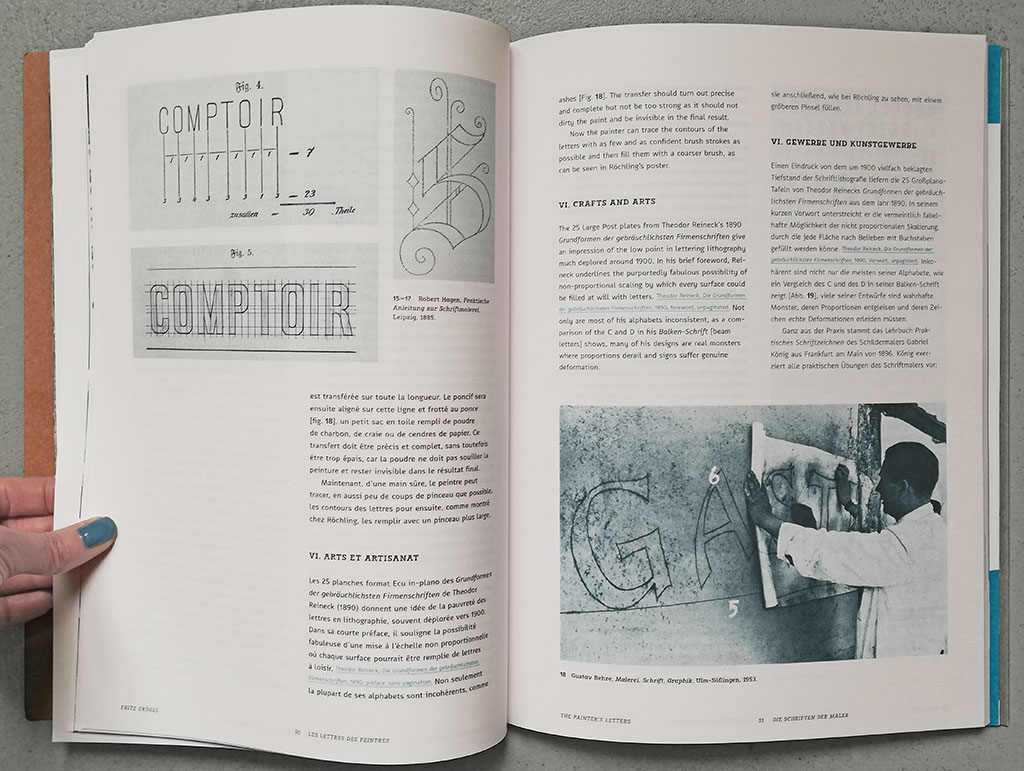 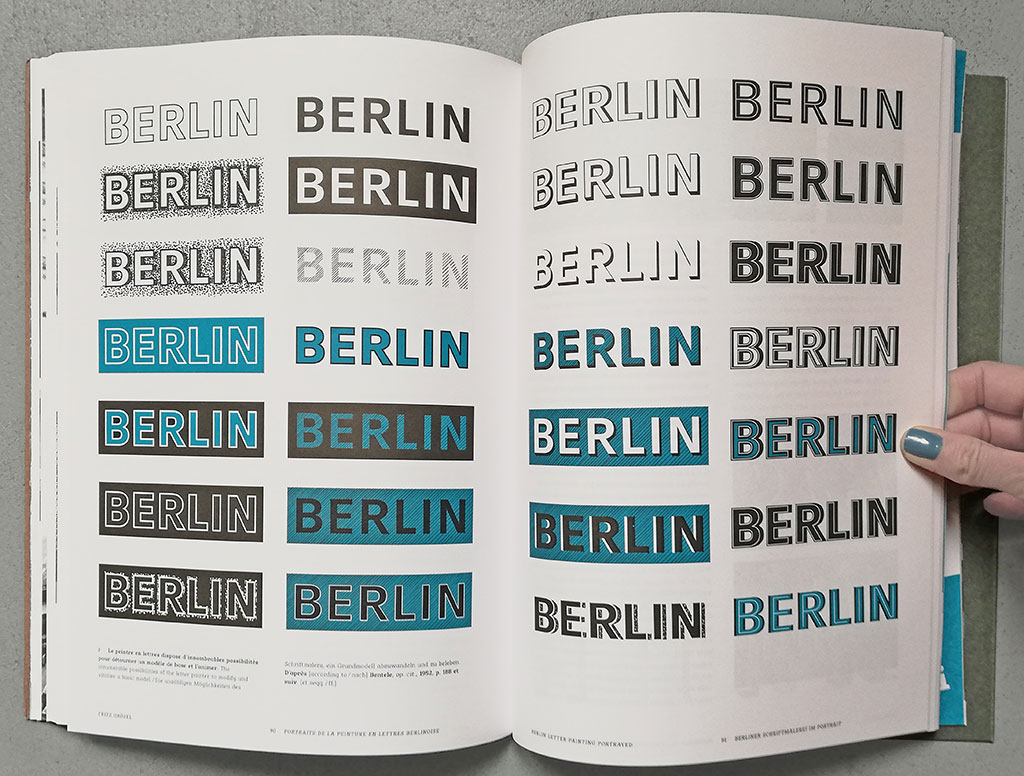 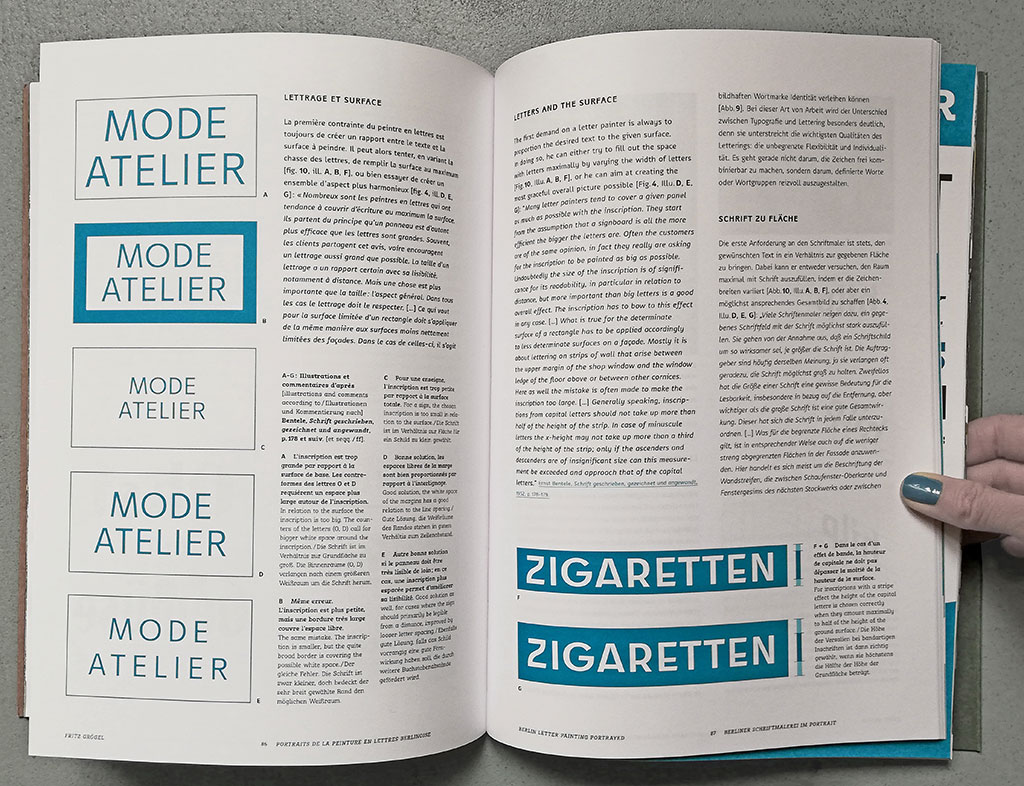 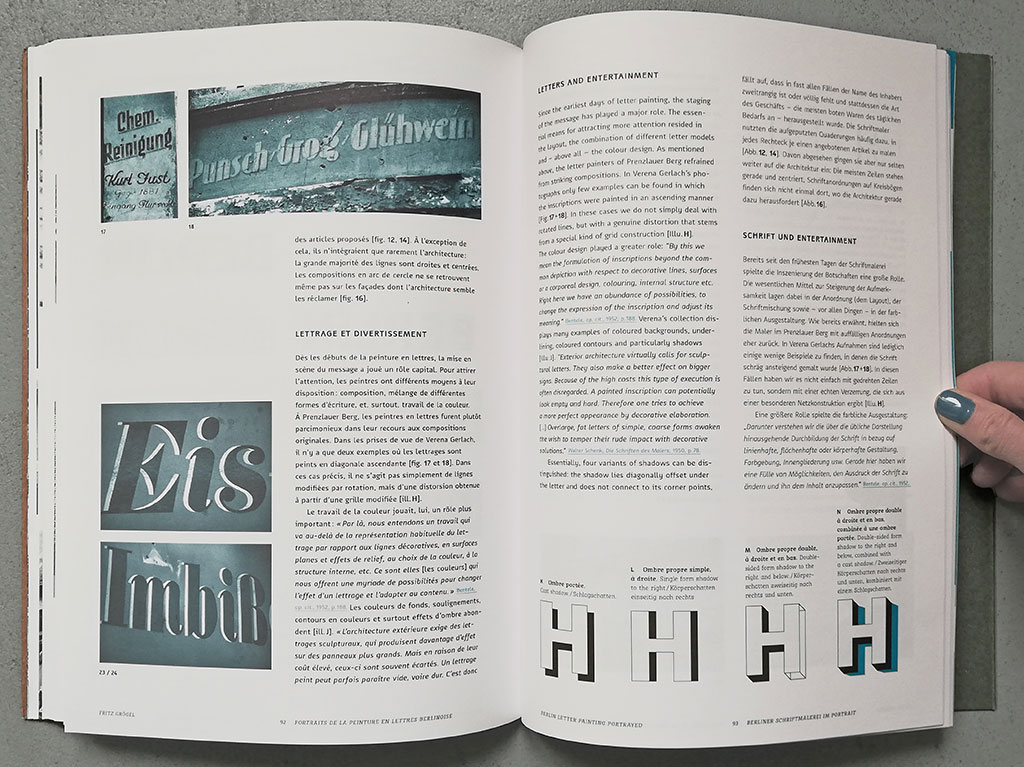 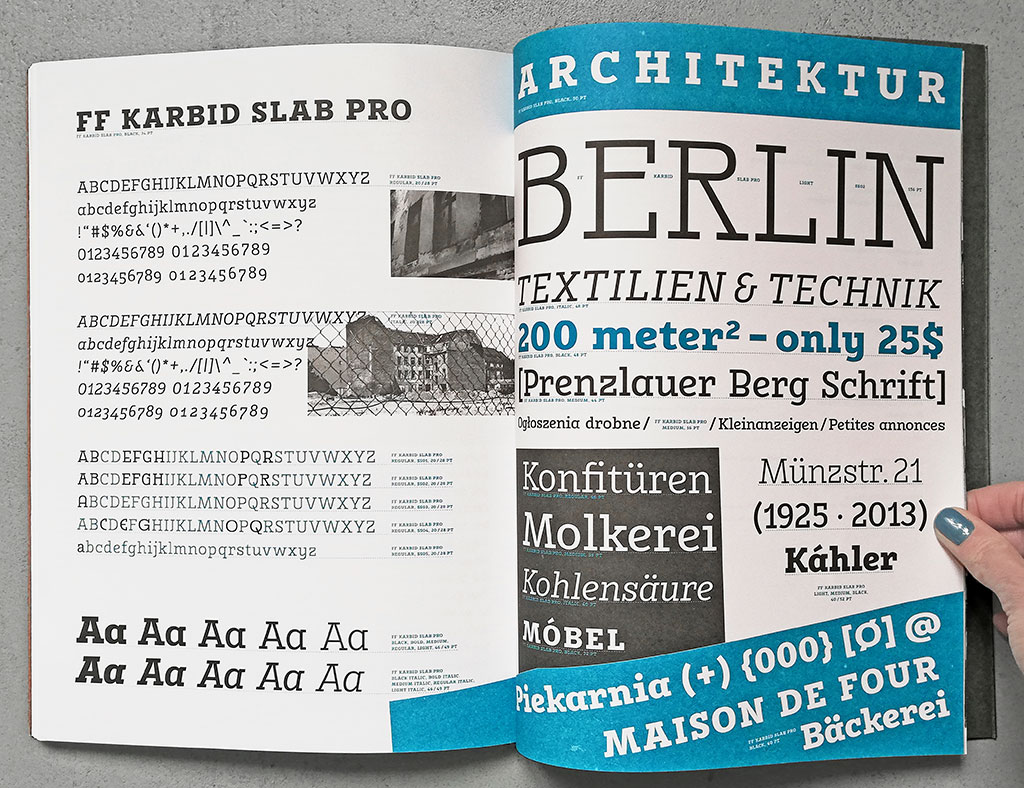 The book layout deals with the very complex idea of showing the texts in three languages, also strictly related to the mentioned images and illustrations.
This book is not meant to be an essay and picture book only, but much more a colorful description of the typeface FF Karbid Pro and it’s making of. Therefore, the whole book is functioning as more than 100 pages of type specimen.
To catch the »smell« of this special city at this important political period, I also created some illustration collages, combining historic images and the original letterings. 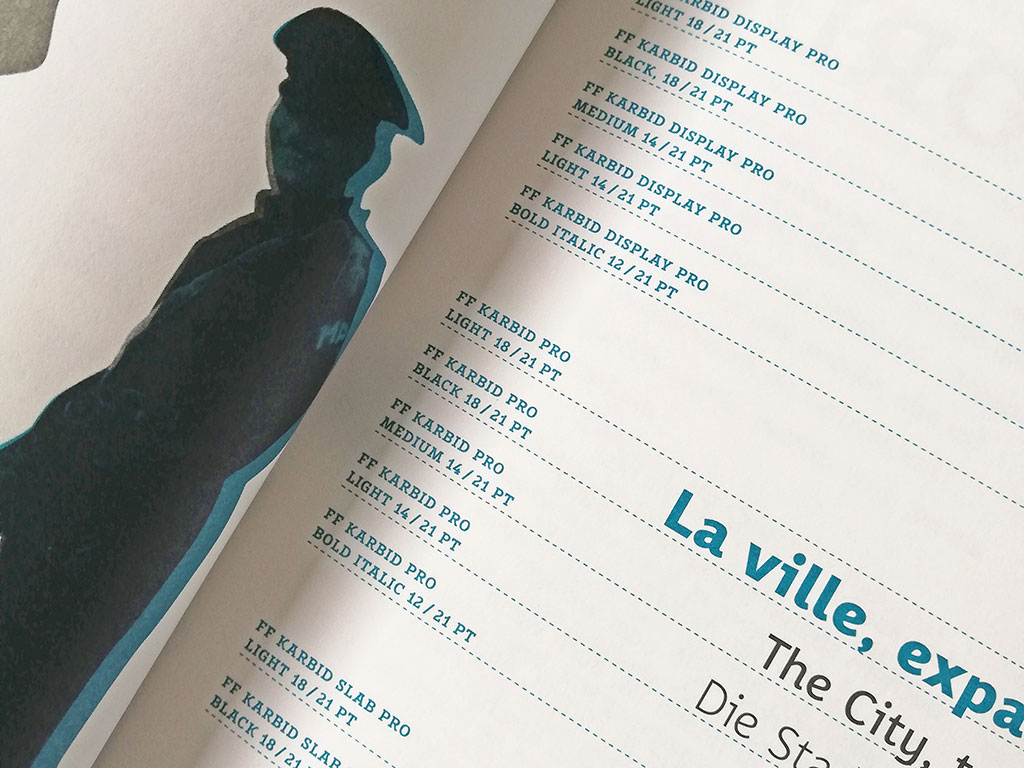 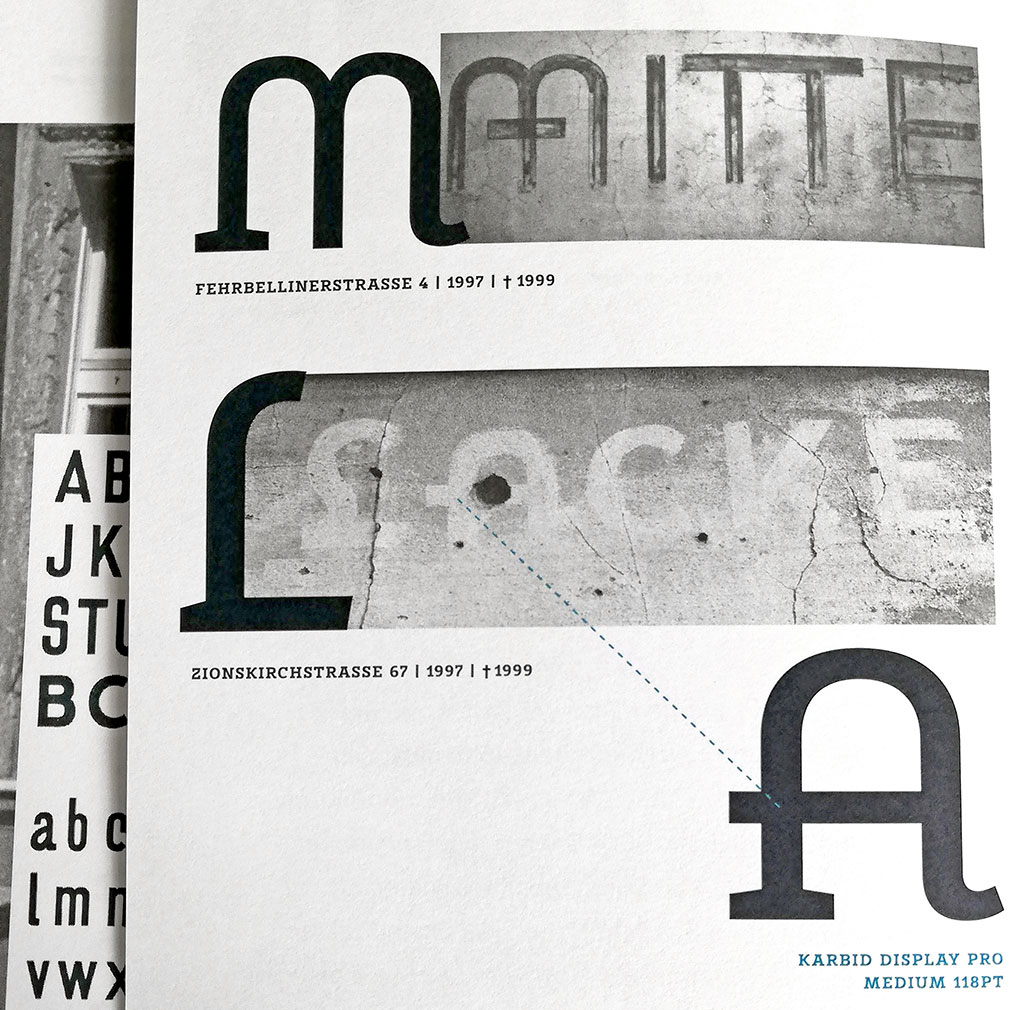 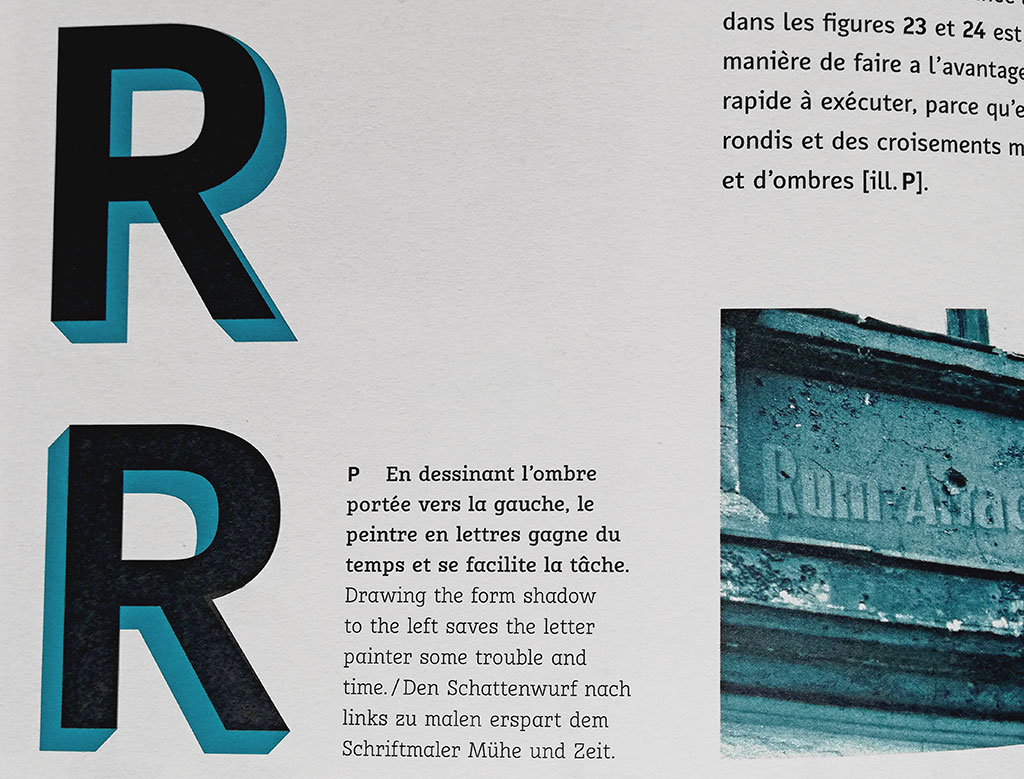 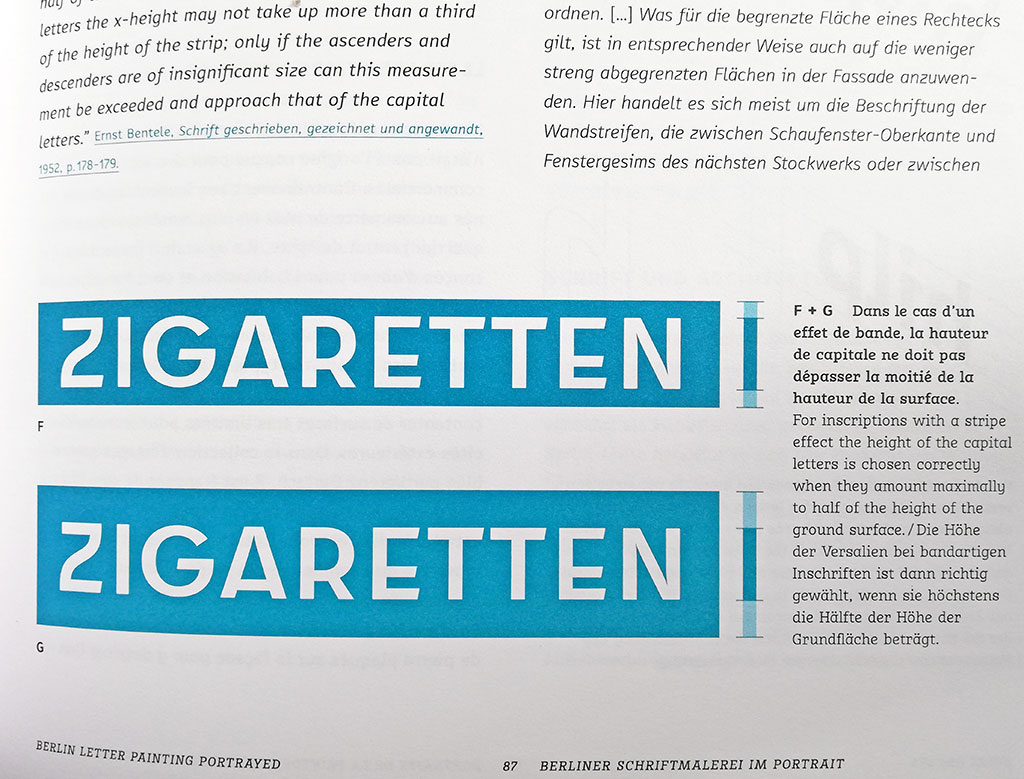 Special thanks to Fritz Grögel for his fantastic essays and all his incredible support of this project.
My regards go to Tomasz Fabianowicz, for his assistance, Christiane Landgrebe, and Clemens von Lucius.
Many thanks to Fred Smeijers for his wonderful foreword.

Due to possible shipping costs and for environmental concerns, please buy/order your copy from your local bookshop.

The typeface FF Karbid Pro is available at Myfonts.