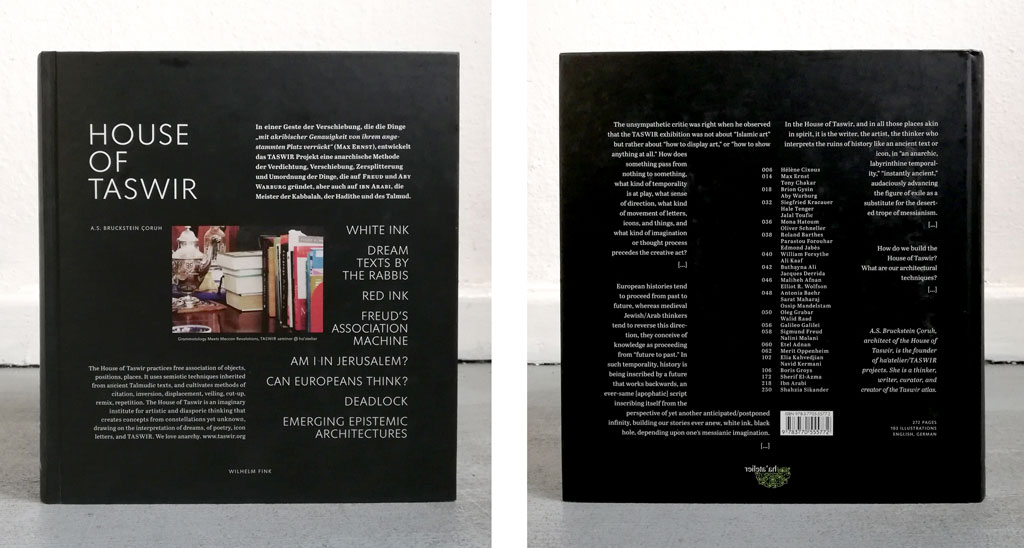 With her House of TASWIR, A.S. Bruckstein Çoruh designs a highly idiosyncratic epistemic architecture whose cosmopolitan Jewish protagonists—splinterers of the logos, vagrants, and believers in the iconic quality of letters—have largely withdrawn past the surpassing disaster of the European twentieth century. 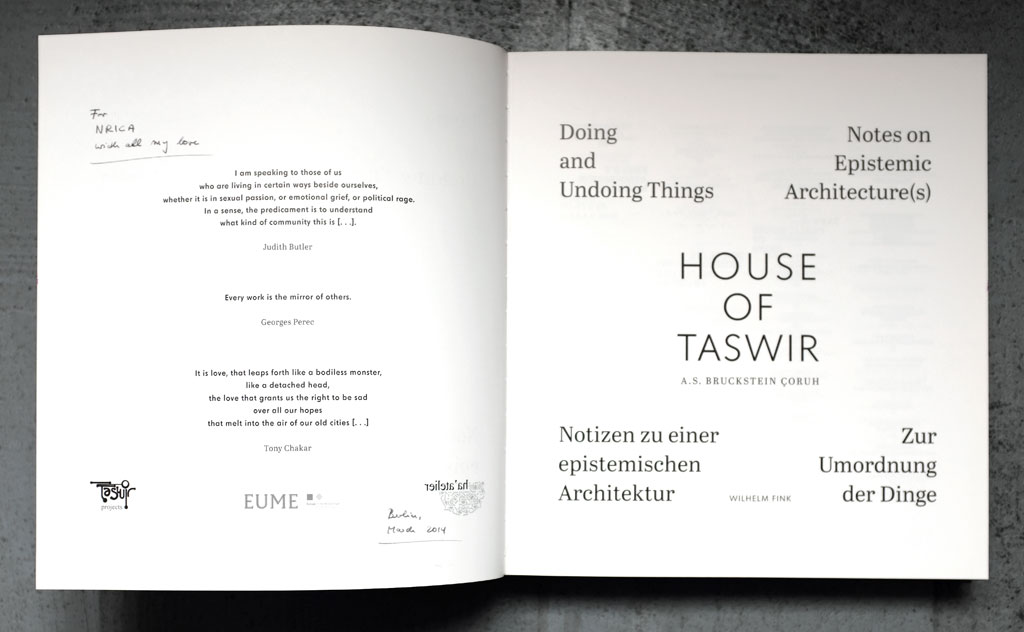 By connecting pre-modern paths of knowledge with Surrealist, Dadaist, and contemporary techniques of assemblage, sampling and remixing, TASWIR creates a radical simultaneity and overlapping of multi-local and diachronic references that together makes up the House of TASWIR. 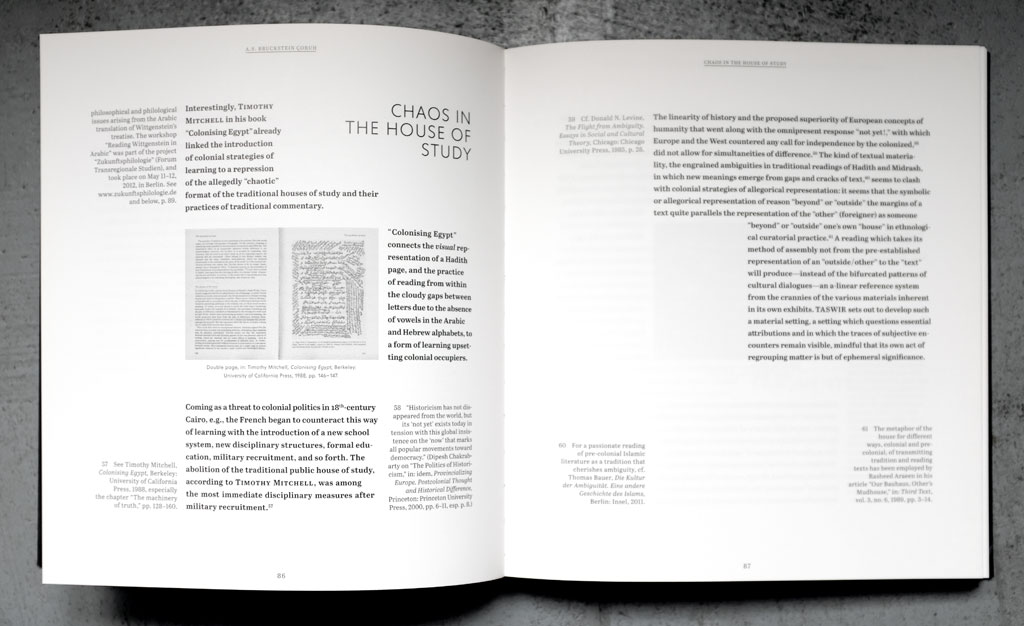 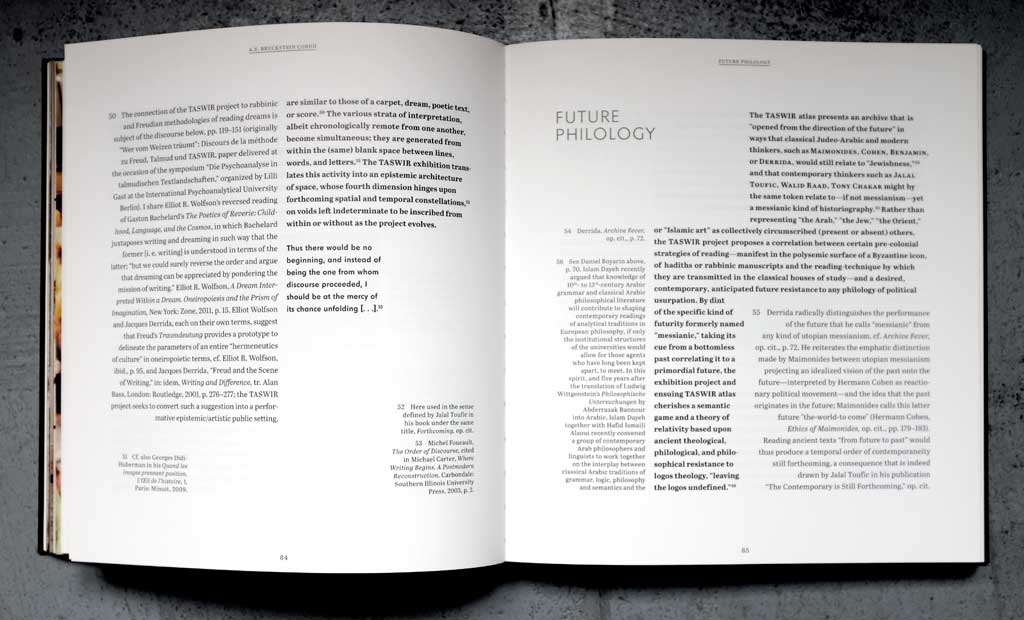 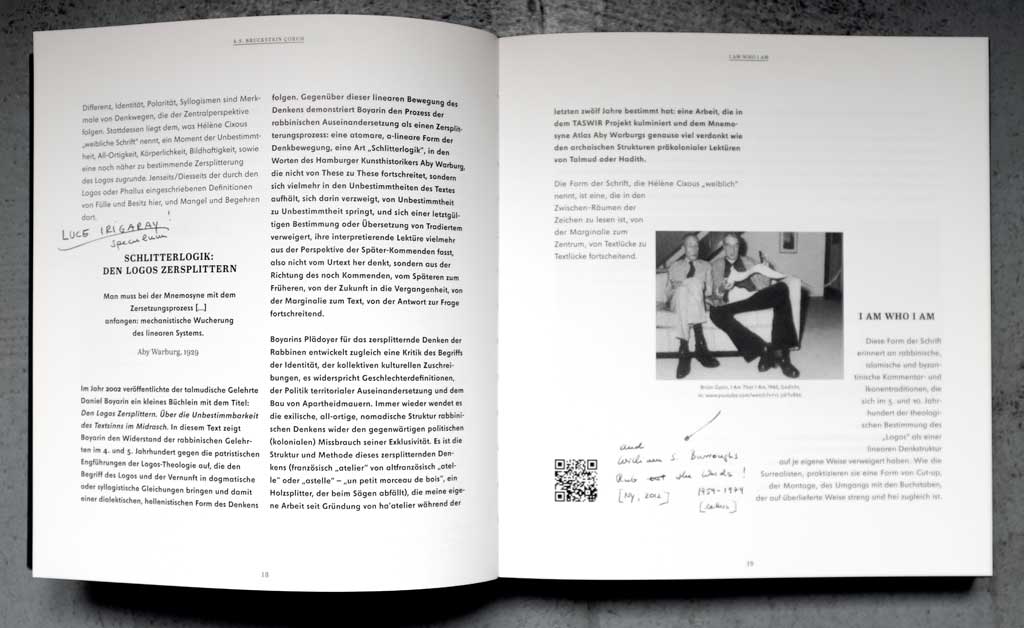 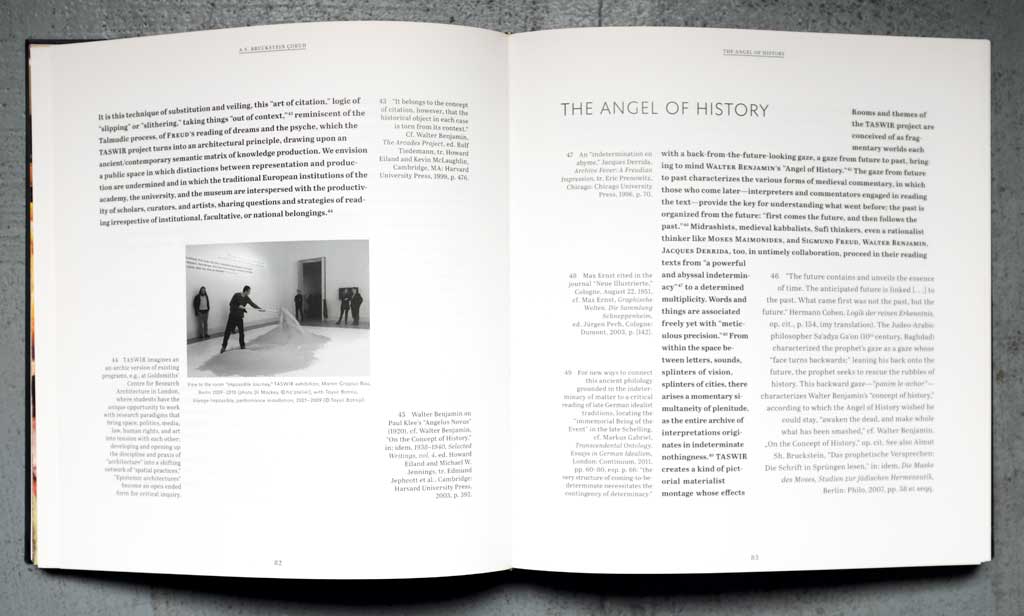 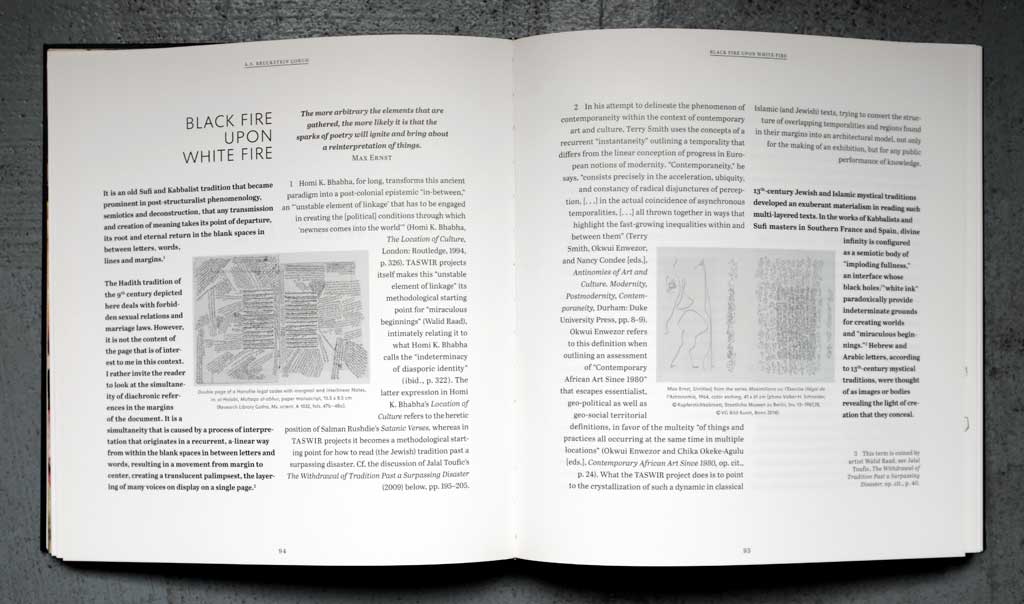 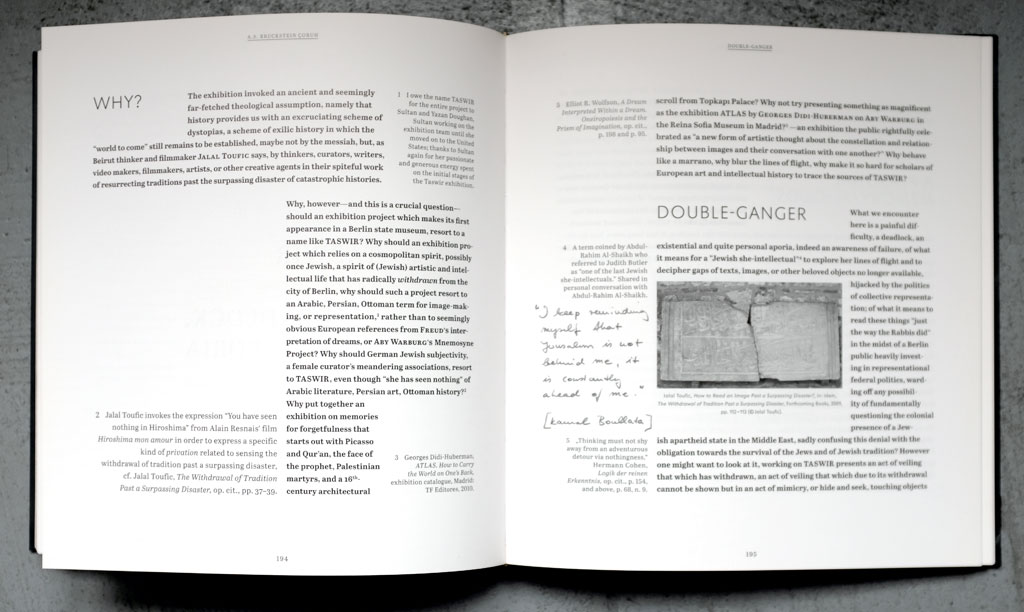 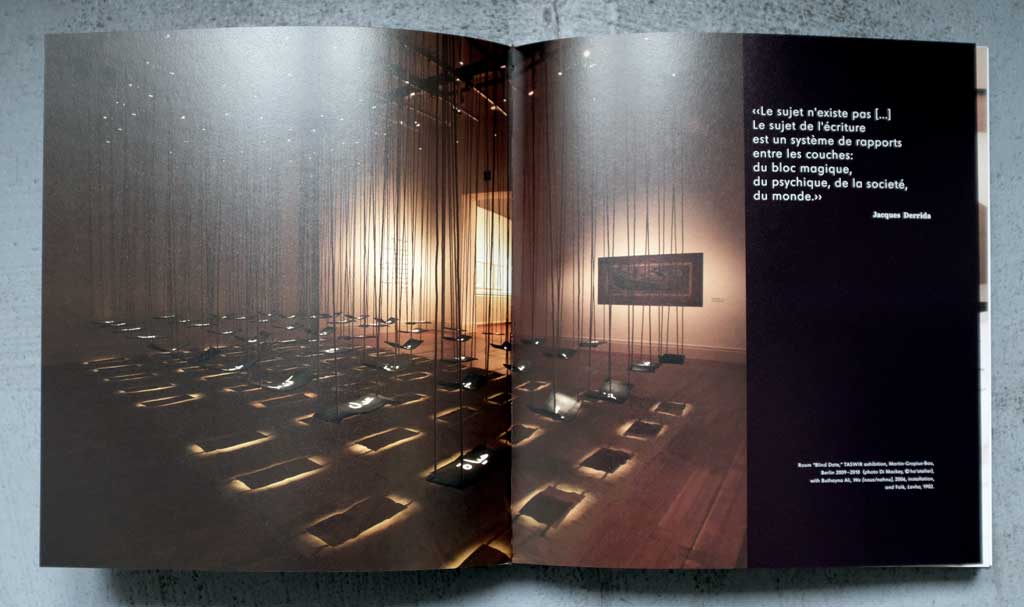 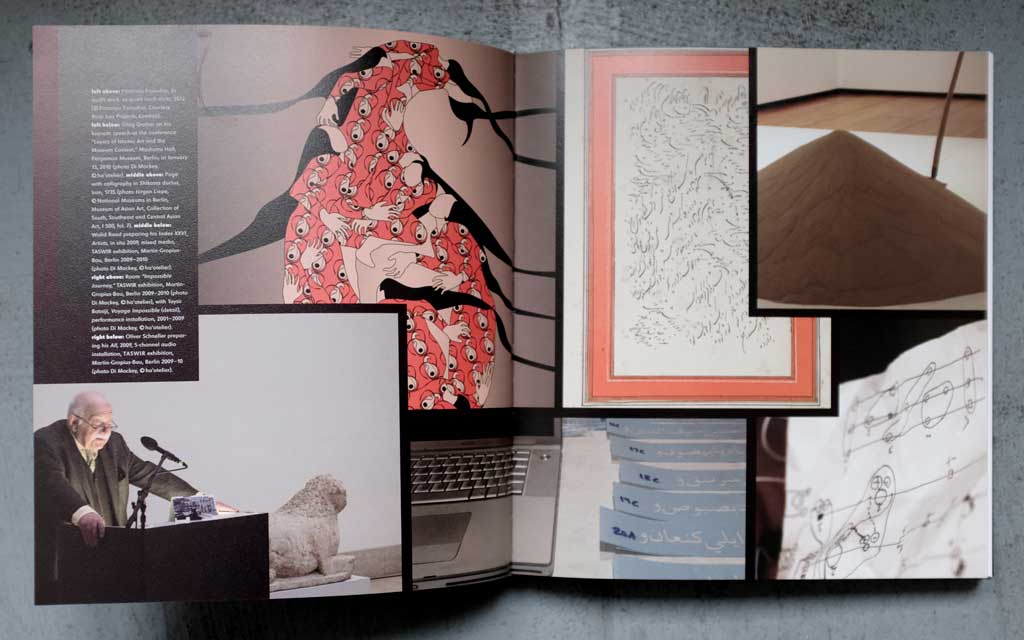 This ambitious, typographic masterpiece (madness) was artdirected and implemented by my great colleague Hannes Aechter.
The cover functions already as part of the content and the spreads. It takes away the distance between the reader and the actual book.
One central element of this book is the TASWIR atlas, that simulates the “displacement of the display walls“, a gesture with which art historian Aby Warburg in his pictorial atlas Mnemosyne kept extending, relocating and regrouping his books, pictures and images in the Library of Cultural Sciences in Hamburg.
To reflect the idea of the atlas, and to support the idea of a not chronological reading process, the text is fractioned into parts, that can be treated separately but also as a complete text. The layout is very much inspired by the Talmud: The central part is an image or a thought, or even a void. Everything else is arranged around the image (table).
Almost all the four corners of the spreads are filled with content, which can be seen as a frame.
The footnotes are treated purely emotional, and the designers decided about their importance and appearance. »Important« footnotes are set larger than the once of less relevance.
Sometimes, they are even more important, than the main text, pushing it away.
To mark and make the acoustic and video footage accessible, QR Codes are used. 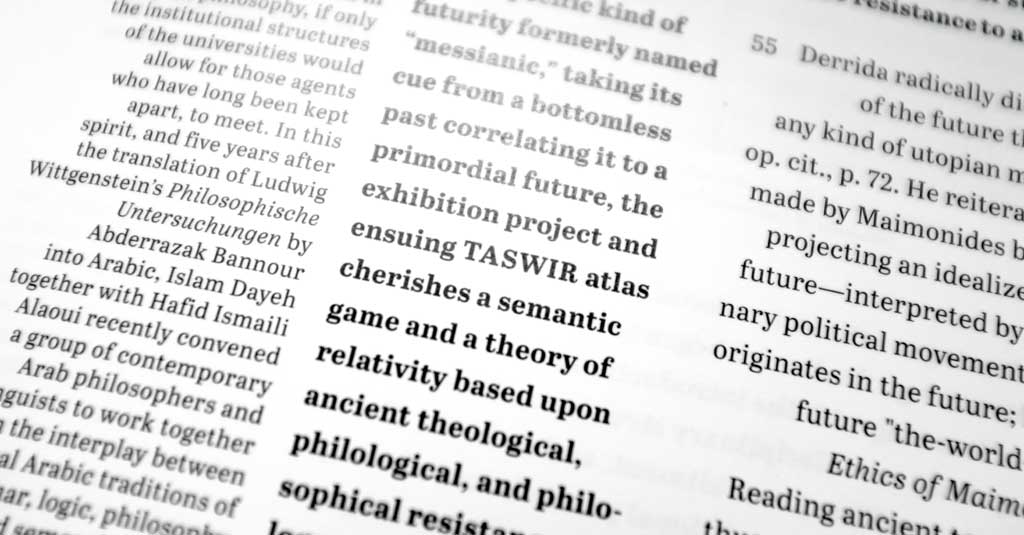 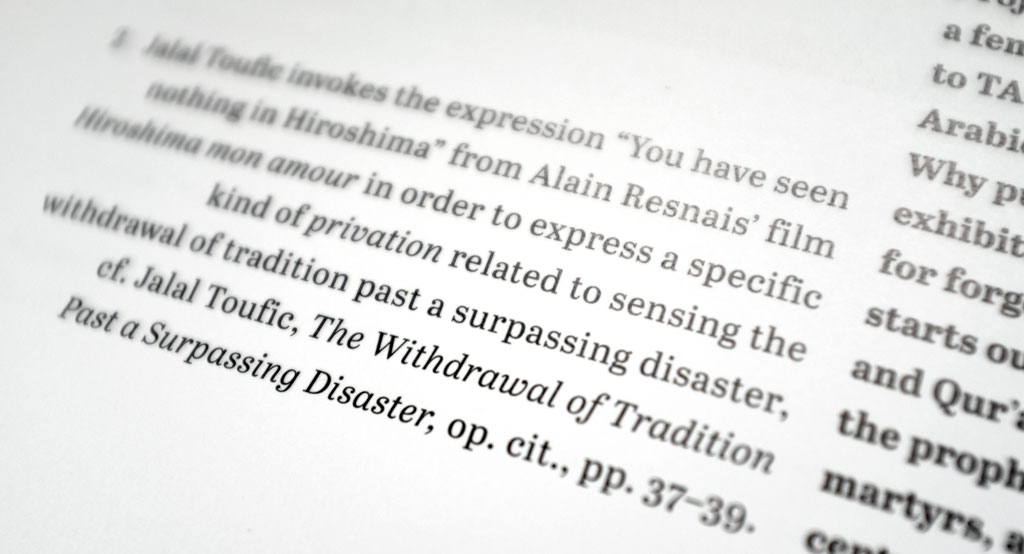 Since this project/book is »living«, and will never be finalized, A.S. Bruckstein Çoruh’s (to this time) actual thoughts and sources are printed as handwritten margins into he book. Also, the QR Codes can always be filled with contemporary content.
For the body texts, I used the beautiful Abril Text by Veronika Burian & José Scaglione from typetogether. 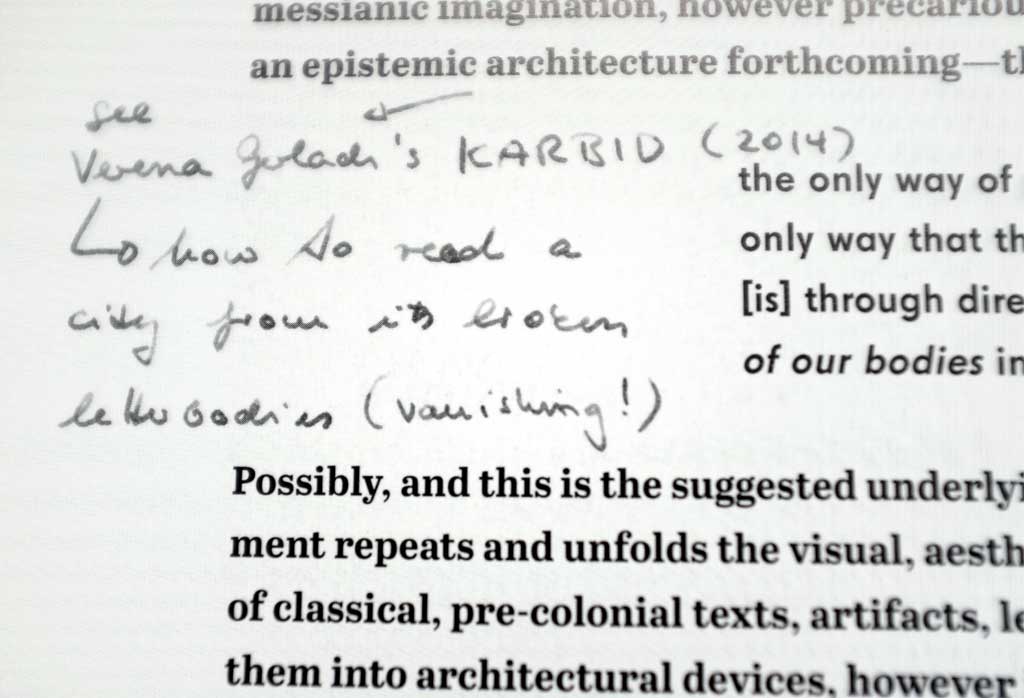 My regards go to the fantastic Shulamit Bruckstein Çoruh, who is one of the most inspiring ladies, I ever met.

… more about the House Of Taswir.?